I’m trying to run a phyton script but just get “error: Error: Some errors occurred during execution” as a result after clicking the “run script” button.

I’m using seatable 1.4 with a docker setup.
First the dtable_web.log showed me errors like

Did I miss to configure something?

Running Python script in not supported yet in self-hosted version.

Hi Michael, welcome to the SeaTable Forum! And unfortunately, as Daniel wrote, Python is not yet supported in the current on-premise version. We are glad to see you are using SeaTable and hope you enjoy it, so we’ll try our best to provide the latest docker image soon. Thanks in advance for your patience!

Tutorial - Use API in Postman and convert into every language! Tips & Tricks

Tutorial Postman 1. Import curl command into Postman 1. As an example I use auth ping(https://docs.seatable.io/published/seatable-api/home.md): curl -H 'Authorization: Token 24fd3c026886e3121b2ca630805ed425c272cb96' https://cloud.seatable.io/api2/auth/ping/ 2. Open Postman and click on Import->Raw Text Then Continue And Import [image] 3. Use Postman You can now click on send button and check if everything has worked, if yes everything will be output in json format. [image] Covert A…

Any update on that point?
I can create, run or delete javascripts without issue.
But I’ve got an issue with python scripts.
I can create them, but I can’t delete them nor run them !
In addition, the contextual menu is broken 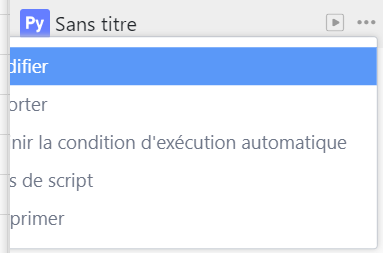 As you see, the menu is split on the left part with words cut.
When I try to remove the script, I get an internal error.

If you are not - it shouldn’t appear in your menu, so it should be a bug!

Then, I’ve got a bug.
I’m using the community edition
I’ve got the choice in scripts, between python and js. I can create the python and it appears so does the interface.
But I can’t delete the scripts.

There was a long story with the version 1.6…some of the features in EE (Enterprise Edition) were packed in it by mistake. From 1.7 this should have been fixed. Version 1.7 will be out in two weeks or so!

Sorry, developper edition installed 2 days ago, so must be 1.6

OK, then this Python bug could not be fixed here, sorry! But like said, version 1.7 will be better!

after upgrading to 1.7, I hope that I’ll be able to delete the two python scripts that we created

so when it will be fixed? I’m using EE version

Are you using EE in self hosted? Then you are using 1.6, I gather. It will be fixed in 1.7, which will be available in the next 2 weeks or so!

can you run the python script?

I did not try.
Give me a basic script that should work and I can give a try.
But I think that the dev edition is not supposed to run python scripts, just JS

You are right, if there’s no bug, the Developer Edition shouldn’t be able to run Python scripts…

how about the EE edition? I’m waiting for being able to run the python script

Running Python will be added in version 1.8 for EE. You will need to deploy a separate service for running Python.