I cannot install seatable any more. I tried to install Enterprise edition. Followed instructions from here:

docker login is not possible, but docker pull was possible without any login

I tried to run docker-compose up -d

the problem is: there is no nginx.conf, no ssl configuration…
in /opt/seatable/seatable-data/seatable/conf.
any help?
(ubuntu 20.04.2)
here is my docker-compose.yml

(xyz = placeholder for my environment)

the error from docker login is:
Error response from daemon: Get https://registry-1.docker.io/v2/: unauthorized: please use personal access token to login

There was a recent change on Docker Hub for the credentials of SeaTable Enterprise.

Temporarily please use your own Docker Hub credentials (or try anonymous but you might run into Docker Hub rate limitations).

If there are further changes we’ll communicate them here in the forums as well.

Please let me know if this solves your issue.

No, install failes.
The problem ist that no nginx is installed / working. 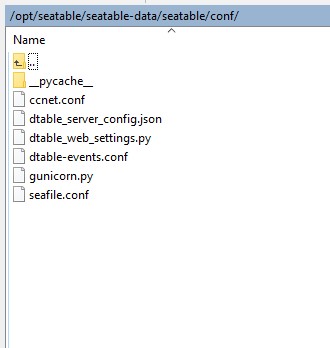 also “reload nginx” results in:
“/etc/nginx/sites-enabled/default” failed (2: No such file or directory) in /etc/nginx/nginx.conf:25

Did you do fresh install or are you doing an upgrade? In case of an upgrade, what was the previous version?

It is a fresh install

I reinstalled the complete system once again. after docker compose up the log files tells:

Looks like a good pointer and would explain why Nginx can’t start afterwards.

You can give it a try with SEATABLE_SERVER_LETSENCRYPT=False when installing to see if that part is causing it.

And you’re doing it faster than I can do the typing. Let me try to reproduce it.

I could reproduce, at least what I think your issue is.

Please check the init-log seatable-data/seatable/logs/init.log, it should show the details about initializing lets encrypt. Right before the lines you reported a few comments ago:

A common issue is that the domain in use is not accessible from the lets encrypt service (https://letsencrypt.org/). It then can only fail.

So please check your Domain if it is publicly connected to DNS and routing to the container works. This is necessary, otherwise Letsencrypt can not verify and no certificate is created. For example if DNS is not working, you may see a message similar to the following in the init-log:

If that is not an option, you can create and use your own certificate if you’re looking for TLS/HTTPS suppor nevertheless. A description on how to do this is available in SeaTable Admin Manual: If you want to use your own SSL certificate, you can refer to the following steps (scroll to that sentence).

Hey everybody,
I also experienced that I ran into some letsencrypt limits after recreating a demo-site every day.
So my bet is:

hm…may be i am running into the limits…I will give it a another try in a few days…
what is interesting for me is: once started the docker compose up. A certificate request is created:

During handling of the above exception, another exception occurred:

the ping on subdomain result is ok. so the ip/domain points to the server and is reachable.

Thank you for your help.

Good to read you could setup everything according to your needs!

Maybe some information to add as you asked yourself if this may have been LE rate limits related and there were more some comments about it earlier:

If ACME/LE rate limits are a cause of error, the error message states such. It would look like something along the following lines:

You would also not need to take a week off, just hitting it at an early stage, especially if early connectivity or DNS setup is still brittle, the limits are not that harsh:

There is a Failed Validation limit of 5 failures per account, per hostname, per hour.

So this would set you on an extended coffee-break with a walk to a good bakery for some nice cake. Or to read the link about LE rate-limits given in the error message.

Some more commands to test for connectivity on the host and also from within the container:

The same curl command can also be run on the host.:

In both cases I would expect that they give a 502 as long as nginx.conf is not there (which is fine. This is the default and is before Nginx has been fully configured, e.g. before LE ran through. Nginx then runs in a limited mode to allow ACME Tiny to do the LE HTTP challenge/response).

Depending on DNS resolution for the hostname, the second curl command may have revealed that the WAN IP was still propagating and/or iptables not being configured to allow access on the ports, but that would be more clear when accessing from a remote host, as when the routing is only on the host, it would only check the connectivity into the container which is normally not an issue (but perhaps a good test in trouble-shooting).

DNS can be especially tricky as it is cached at multiple places. Curl can help here by requesting with the hostname but also tell curl which IP to use, so you can test for e.g. the firewall configuration before DNS propagation went through, e.g. for port 80 and 443 (HTTP/HTTPS). It is the --resolve <host:port:addr> argument (there is more info on the curl blog):

Just in case this is helpful for future visitors.

Have fun with your new SeaTable setup. And welcome again to the SeaTable forums!