I would like to be able to add line breaks in “Text” columns. Is that possible?

If not, is there a way to toggle plain text editing in long text columns without having to enclose the text in backticks? I would like to be able to see and edit the actual source text (i.e. the actual data that gets exported when retrieving the row data through the API).

Edit: the ‘code block’ solution does not work on uploaded data, by the way. When I upload data that has the value right atri\w*[^.]*?\b(enters?|in|-*>|through|to|entry|via|then)[^.\n]{0,15}?right ventricle in a long text cell, the SeaTable cell editor shows me the formatted version:

When I enclose this in a code block, I don’t actually see the original plain text in the code block. Instead, I see a monospaced formatted version:

This seems to make it impossible to edit plain text with line breaks?

the keyword is “row height”. 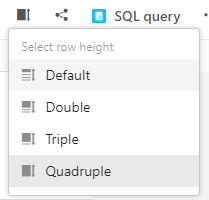 line breaks will be automatically added to text columns if the text is longer than the column width, when you have set the row height to double or more.

Regarding the long text: when you set the row height to quadruple, a preview will be presented: 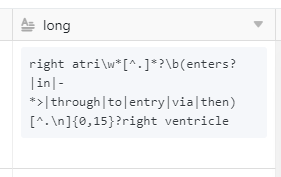 For pasting plain texts into a codeblock: I cannot reproduce your result. How did you do it?

I did not explain my issue clearly, I think. What I would like to do is to edit plain text and manually add line breaks. ‘Text’ columns do not seem to allow you to manually insert line breaks (I tried both <ctrl>+<enter> and <shift>+<enter> but those both just move the cursor to the row below.

“Long text” columns allow you insert line breaks, but also automatically interpret any of the special characters as formatting markup, which I don’t always want (e.g. when typing regular expressions, I don’t want a succession of asterisks to be interpreted as ‘convert to italics’). That would not be a problem if you could toggle between the current editor and a “source” editor (which wouldn’t interpret any of the formatting markup, but just allow you to edit the plain text).

The code block is the closest to a solution I can currently think of, but when importing a csv and then enclosing the imported text as a code block, you don’t actually see the plain text (which is different from pasting data into the code block). Additionally, in my use case, I’d prefer the actual data not to contain the backticks that are added for creating the code block, because I then have to strip them when exporting the data.

The text column simply doesn’t support for line breaks.
That the long text editor automatically recognizes the formatting markup from imported CSV file shouldn’t be observed as a bug, but rather a feature.

If this is your workflow, I would rather take this as a feature request.

Ok, Can I move this thread to Feature Requests? Or should I close it and open a new topic there?

You don’t have to move it. I’ve done it already. Thanks for the request!

This topic was automatically closed 90 days after the last reply. New replies are no longer allowed.